Reminiscent of the wild cats, the American Bobtail is a medium-large to large, naturally occurring short-tailed cat, native to North America. It is a well-muscled, solid cat with the power and grace of an athlete. It has the gaze of the hunter and the rolling gait that, along with its naturally bobbed tail, give it the resemblance to the wild cats but with the loving affection and intelligence of the domestic cat.
No two tails are identical so they are truly the hallmark of the individual and are proudly held above the back when the cat is alert, often wagging to express the cat’s mood. Developed by nature to survive in its native environment, the American Bobtail has above average intelligence and is a breed of moderation rather than extremes taking up to 3 years to reach full maturity.

He might have a bit of a wild expression, but at heart the American Bobtail is a self-assured, affectionate cat who loves his family and is friendly toward guests if he has been well socialized. He is a good choice for families with older children who will treat him respectfully, but toddlers should be supervised so they don’t pull his whiskers or what there is of his tail. He is also perfectly capable of getting along with cat-friendly dogs in the household.
His favorite hobbies include playing fetch, going for walks on leash and stealing shiny objects. He’s a good traveler and makes an excellent therapy cat.
The American Bobtail is well suited to any home with people who will love him and care for him. Keep him indoors to protect him from cars, diseases spread by other cats and attacks from other animals.

Breed standards
Other names: None

Lap Cat: Yes
Physique: Rectangular, solid build
Average lifespan: 11-15 years
Average size: 7-16 pounds
Coat appearance: Dense, Heavy Undercoat, Long, Plush, and Short
Coloration: Black, Blue, Brown, Chocolate, Cream, Fawn, and White
Pattern: All
Hypoallergenic: No
Best Suited For: Families with older children or singles with other pets
Temperament: Highly intelligent, interactive, affectionate, and lively
History
Although the Bobtail has been in America for many generations, the true development of the breed began in the late 1960’s. Every breeder of the American Bobtail has heard the story of Yodi, the patriarch of the breed. John and Brenda Sanders, a young couple, were vacationing in the southwest. They were driving through an Indian Reservation in Arizona when they discovered a brown tabby kitten with a short tail and decided to take their new pet home to Iowa. When Yodi became of age, he romanced the couple’s female cat, Mishi, a non-pedigreed domestic color point. The resulting kittens inherited Yodi’s unusual short tail.
The kittens soon caught the eye of family friends, Mindy Shultz and Charlotte Bentley, who saw the possibility of a new breed of felines. Using several of these bobtailed kittens and outcrossing to a longhaired color point, they produced the first true American Bobtails.
In 1989, TICA recognized the American Bobtail as a naturally occurring breed of cat. The foundation stock of this breed comes from feral cats possessing a natural short tail from different regions of the United States and Canada. Most breeders no longer use feral bobtailed cats in their breeding programs.
Personality

If you’ve always wanted a dog in a cat’s body, the American Bobtail is the breed for you. He is easygoing, affectionate and adaptable. Whether you live in a noisy home with lots of kids and other pets or have a more quiet lifestyle, he will settle in quickly. It’s not unusual to find him traveling with long-distance truck drivers or people seeing the country in their RV. Some psychotherapists have included American Bobtails in their treatment programs because of the cats’ sensitivity to human emotions.
Whatever his lifestyle, the American Bobtail enjoys company, whether that of humans, other cats, or even dogs. They get along with children and will play fetch and learn tricks. Only moderately active, they are easy to live with and are not an “in your face” kind of cat.
The American Bobtail is highly intelligent. Challenge his brain and keep him interested in life by teaching him tricks and providing him with puzzle toys that will reward him with kibble or treats when he learns how to manipulate them.
Always choose a kitten from a breeder who raises litters in the home and handles them from an early age. Meet at least one and ideally both of the parents to ensure that they have nice temperaments.
Health Predispositions

There are no reliably reported health problems unique to the American Bobtail cat. As a breed, they seem to be particularly hearty, probably due to the closeness of feral bloodlines in their pedigree.
Care
The American Bobtail’s coat doesn’t usually mat or tangle as long as you comb or brush it a couple of times a week. You may notice that the cat sheds more in the spring and fall, so it can be a good idea to groom him more frequently during those times. A bath is rarely necessary.
Brush the teeth to prevent periodontal disease. Daily dental hygiene is best, but weekly brushing is better than nothing. Trim the nails every couple of weeks. Wipe the corners of the eyes with a soft, damp cloth to remove any discharge. Use a separate area of the cloth for each eye so you don’t run the risk of spreading any infection.
Check the ears weekly. If they look dirty, wipe them out with a cotton ball or soft damp cloth moistened with a 50-50 mixture of cider vinegar and warm water. Avoid using cotton swabs, which can damage the interior of the ear.
Keep the litter box spotlessly clean. Cats are very particular about bathroom hygiene.
It’s a good idea to keep an American Bobtail as an indoor-only cat to protect him from diseases spread by other cats, attacks by dogs or coyotes, and the other dangers that face cats who go outdoors, such as being hit by a car. American Bobtails who go outdoors also run the risk of being stolen by someone who would like to have such a beautiful cat without paying for it.
Behavioral Traits

The Bobtail is known for its clown-like behavior and will provide hours of entertainment for its family members. This breed loves to play games, such as hide-and-seek and fetch; often, it will initiate these games and be quite persistent until someone becomes engaged. The Bobtail is tolerant of and gentle with children, and apparently does not mind being toted around like a sack of potatoes or a load of laundry.
American Bobtails are not a particularly vocal breed, but they will purr, trill, chirp and click when they are especially happy. The Bobtail has a particular affinity for shiny objects. Their owners are well-advised to keep jewelry and other sparkly items far out of their reach. Both males and females of this breed are self-confident, mellow and “laid-back.” Males typically allow females, kittens and other pets to eat first and are very protective of their offspring.
Activity Level
Today’s American Bobtail still possesses many of the characteristics of its close feral ancestors. It is fearless and outgoing, without being aggressive. The Bobtail enjoys activity and gets most of its exercise through playing with its people and other pets. It also takes well to leash-training and enjoys long on-leash walks around the neighborhood.
Grooming an American Bobtail

Brush the American Bobtail at least twice a week to remove dead hair and keep his coat shiny and healthy. A rubber curry brush or a slicker brush is a good grooming tool for his coat. The only other care he needs is weekly nail trimming and occasional ear cleaning.
Children and Other Pets
The social and laidback American Bobtail likes to play, so he’s a good choice for families with children. Always supervise younger children to make sure they don’t hurt the cat by pulling his fur or twisting his tail. He is happy to live with other cats and cat-friendly dogs, too, thanks to his amiable disposition. Introduce pets slowly and in controlled circumstances to ensure that they learn to get along together.

Is the American Bobtail the Right Breed for you?
Moderate Maintenance: Regular grooming is advised to keep its coat in good shape. It stimulates circulation, massages the skin, and removes debris and loose hair. Frequency should be once a week and twice a week .
Constant Shedding: Shedding will occur often for this cat breed. It is suggested to brush and comb its coat regularly to reduce the risk of it developing hairballs. Be prepared also to vacuum often.
Health Problems: Unfortunately, it is known to have a myriad count of illnesses and conditions. Owners with these cat breeds should prepare for some long-term medical costs or hedge their risks with pet insurance.
Moderate Vocalization: Its vocal behavior can be tolerable. Eliminating stimuli that cause the vocalization or modifying the cat’s behavior, such as keeping it occupied and content, can reduce vocalization.

Moderate Attention: This breed needs a moderate level of attention. It provides the appropriate balance for owners who like involving their cats in activities but are also able to be independent. Time alone spent can be 4 to 8 hours per day.
Very Active: It likes to engage in activities. Try to spend 10-15 minutes actively involved with this breed several times a day. Daily exercise will help maintain its body weight and keep its muscles toned and strong.
Good With Others: It is usually good with adults, children , and seniors and can be very affectionate towards them.
Did You Know?
The American Bobtail came into being in the 1960s, when a Siamese cat was crossed with short-tailed male tabby.
Total
0
Shares
Share 0
Tweet 0
Pin it 0 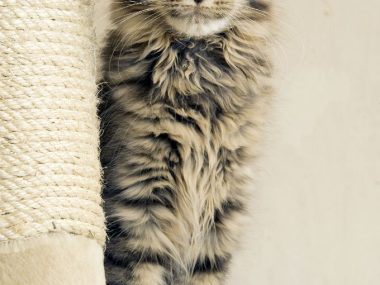 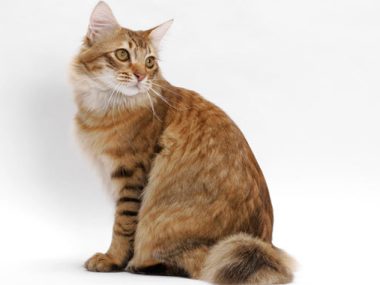 Read More
The American Bobtail is an uncommon breed of domestic cat which was developed in the late 1960s.…
Read More
0
0
0 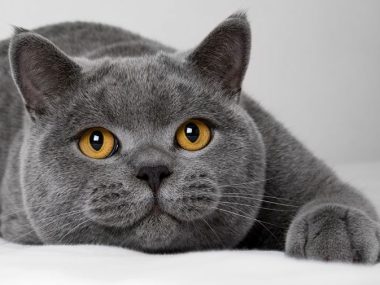 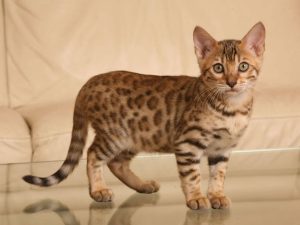